How do I know I have Peptic Ulcer Disease: symptoms, prevention, treatment etc. 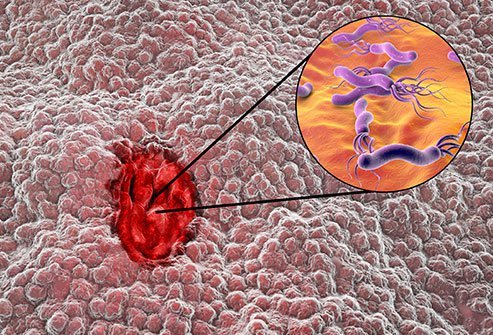 Peptic ulcer disease (PUD) is a break in the inner lining of the stomach, the first part of the small intestine, or sometimes the lower oesophagus. An ulcer in the stomach is called a gastric ulcer, while one in the first part of the intestines is a duodenal ulcer. The most common symptoms of a duodenal ulcer are waking at night with upper abdominal pain and upper abdominal pain that improves with eating. With a gastric ulcer, the pain may worsen with eating. The pain is often described as a burning or dull ache. Other symptoms include belching, vomiting, weight loss, or poor appetite. About a third of older people have no symptoms. Complications may include bleeding, perforation, and blockage of the stomach. Bleeding occurs in as many as 15% of cases.

Common causes include the bacteria Helicobacter pylori and non-steroidal anti-inflammatory drugs (NSAIDs). Other, less common causes include tobacco smoking, stress due to serious illness, Behcet disease, Zollinger-Ellison syndrome, Crohn disease, and liver cirrhosis. Older people are more sensitive to the ulcer-causing effects of NSAIDs. The diagnosis is typically suspected due to the presenting symptoms with confirmation by either endoscopy or barium swallow. H. pylori can be diagnosed by testing the blood for antibodies, a urea breath test, testing the stool for signs of the bacteria, or a biopsy of the stomach. Other conditions that produce similar symptoms include stomach cancer, coronary heart disease, and inflammation of the stomach lining or gallbladder inflammation.

Treatment includes stopping smoking, stopping use of NSAIDs, stopping alcohol, and taking medications to decrease stomach acid. The medication used to decrease acid is usually either a proton pump inhibitor (PPI) or an H2 blocker, with four weeks of treatment initially recommended. Ulcers due to H. pylori are treated with a combination of medications, such as amoxicillin, clarithromycin. Antibiotic resistance is increasing and thus treatment may not always be effective. Bleeding ulcers may be treated by endoscopy, with open surgery typically only used in cases in which it is not successful.

A number of symptoms are associated with peptic ulcer disease. The severity of the symptoms depends on the severity of the ulcer. The most common symptom is a burning sensation or pain in the middle of your abdomen between your chest and belly button. Typically, the pain will be more intense when your stomach is empty, and it can last for a few minutes to several hours.

Other common signs and symptoms of ulcers include;

Talk to your doctor if you have any symptoms of a stomach ulcer. Even though discomfort may be mild, ulcers can worsen if they aren’t treated. Bleeding ulcers can become life-threatening.

You may reduce your risk of peptic ulcer if you follow the same strategies recommended as home remedies to prevent ulcers. It may be helpful to:

Some peptic ulcers heal on their own. But if you don’t treat them, the ulcers tend to come back. They can erode the blood vessel wall in your stomach or small intestine. The ulcers also can eat a hole through the lining and get infected. Or they can cause swelling, which may block food from moving from your stomach into your small intestine. If H. pylori is the culprit, your doctor may prescribe a mix of antibiotics to kill it. If aspirin and other NSAIDs are behind the ulcer, you may need to cut down on them, stop taking them altogether, or switch to another pain reliever. Your doctor may also give you antacids.