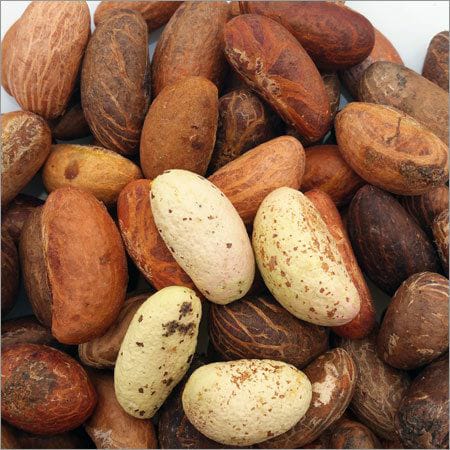 Bitter kola also known as Garcina kola, is a flowering plant found mostly in the tropical rain forest region of Central and Western Africa. It is found in Benin, Cameroon, Democratic Republic of the Congo, Ivory Coast, Mali , Gabon, Ghana, Liberia, Nigeria, Senegal and Sierra Leone. In folkloric medicine, every part of it such as the seeds, stem, and leaves has medicinal value. The seed is what is commonly consumed. Its  seeds have a sharp, bitter flavor that eases into a slight sweetness as you chew, and they are typically eaten raw.

The fruit, seeds (“bitter kola nuts”) and bark of the plant have been used for centuries in folk medicine to treat ailments from coughs to fever. According to a report from the Center for International Forestry Research, its trade is still important to the indigenous communities and villages in Nigeria.

Bitter kola is traditionally used by African folk healers who believe that it has purgative, anti-parasitic, and antimicrobial properties. The seeds are used for laryngitis, liver diseases, cough, hoarseness of voice, and diabetes and its associated complications, bronchitis, colic, head or chest colds. It is also used as a chewing stick

Here are some of the medicinal values of bitter kola;

When it comes to the improvement of sexual performance, especially among men, bitter kola is very useful. It does not only increase sex drive, it also improves the sexual performance of men who consume it. In other to be effective, it is advisable to chew the kola for at least two minutes before sexual intercourse.

A study published in the Science Journal of Microbiology has shown that both the bitter kola seeds and leafs have anti-bacterial properties. Researchers have discovered that they have ability to clinically isolate Staphylococcus aureus, Escherichia coli, Salmonella typhi and Streptococcus pyrogens. . The antibacterial activity was found to be due to the presence of bioactive components in the extract such as tannin, and saponins.

Results from research conducted in conjunction with several Nigerian universities showed that bitter kola has a positive effect on the lungs and can improve ventilation levels. Extracts of the plant have also been studied in relation to asthma, and there is the suggestion that it may have some protective effects against the respiratory disorder.

Bitter kola seeds have commonly been chewed on in Africa to fight against inflammatory conditions like arthritis. A study in 2008 showed that patients with osteoarthritis in their knees experienced significant reduction of inflammation when eating it compared to a placebo. The high levels of potassium in bitter kola may be a contributing factor in reducing inflammation.

Early studies suggest that a chemical called kolaviron, which is found in bitter kola, may protect against hypoglycemia in people with type 2 diabetes. Although this first study was done on rats and has not yet been reproduced on humans, these early findings are promising.