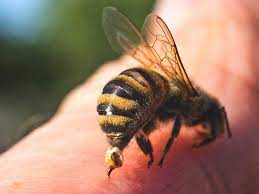 FIRST AID TREATMENT FOR BEE STINGS: A bee sting is the wound and pain caused by the stinger of a female bee puncturing skin. Bee stings differ from insect bites, with the venom of stinging insects having considerable chemical variation.

SYMPTOMS OF A BEE STINGS

Bee stings can produce different reactions, ranging from temporary pain and discomfort to a severe allergic reaction. Having one type of reaction doesn’t mean you’ll always have the same reaction every time you’re stung or that the next reaction will necessarily be more severe.

A severe allergic reaction (anaphylaxis) to bee stings is potentially life threatening and requires emergency treatment. A small percentage of people who are stung by a bee or other insect quickly develop anaphylaxis. Signs and symptoms of anaphylaxis include:

People who have a severe allergic reaction to a bee sting have a 25% to 65% chance of anaphylaxis the next time they’re stung. Talk to your doctor or an allergy specialist about prevention measures such as immunotherapy (“allergy shots”) to avoid a similar reaction in case you get stung again.

Generally, insects such as bees aren’t aggressive, only sting in self-defense. In most cases, this results in one or perhaps a few stings. In some cases a person will disrupt a hive or swarm of bees and get multiple stings. Some types of bees such as Africanized honeybees are more likely than are other bees to swarm, stinging in a group.

If you get stung more than a dozen times, the accumulation of venom may induce a toxic reaction and make you feel quite sick. Signs and symptoms include:

Multiple stings can be a medical emergency in children, older adults, and people who have heart or breathing problems.

Treating bee and wasp stings depends on their severity. The majority of problems that require medical attention come from an allergic reaction to the sting. In most cases, complications from that reaction respond well to medications — when given in time.

The first thing to do is to get the stinger out quickly. The longer the stinger stays in the skin, the more venom it releases, adding to the person’s pain and swelling.

To treat a sting from a bee, wasp, or hornet, dermatologists recommend the following tips:

Below are some tips for bee sting prevention: