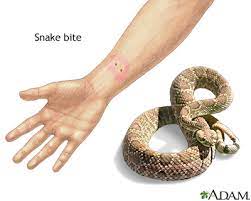 FIRST AID TREATMENT FOR SNAKE BITE: Most snakes aren’t dangerous to humans. Only about 15% worldwide and 20% in the United States are venomous. In North America, these include the rattlesnake, coral snake, water moccasin and copperhead. Their bites can cause severe injuries and sometimes death.

There are basically two different types of snake bites. And one is more serious than the other:

“Bites by venomous snakes can cause acute medical emergencies involving severe paralysis that may prevent breathing, cause bleeding disorders that can lead to fatal hemorrhage, cause irreversible kidney failure and severe local tissue destruction that can cause permanent disability and limb amputation.

It is also important to quickly rush a person bitten by a snake to the hospital to avoid orthopedic effects that could lead to complications and amputation of the limb.

“Normally, once a person is bitten by a snake, the limb is swollen. So, as you tie it, it becomes more swollen and blood will not flow into the limb and the limb will die. And once the limb is dead, it will need an amputation.

It can be difficult to tell the difference between puncture wounds from venomous and nonvenomous snakes. People should seek medical attention for all snakebites.

The typical symptoms of a venomous snakebite include:

DO’S (what to do when bitten by a Snake):

Most snakebite occurs on a limb, so legs, feet, arms and hands are most commonly affected. If you’ve been bitten on a limb, applying a pressure immobilization bandage can stop the venom moving through your lymphatic system.

If you’ve got a pad or even a piece of plastic like cling wrap, put it over the bite site to either soak up or protect the venom for later testing.

How to apply a pressure immobilization bandage step by step:

DONT’S (WHAT NOT TO DO AFTER A SNAKEBITE)

How can you stop snakebite from happening?

Depending on where you live (or choose to vacation), you may or may not have a hard time avoiding snakes. But if you’re going to be in snake territory, there are some useful tips to avoid getting bitten: