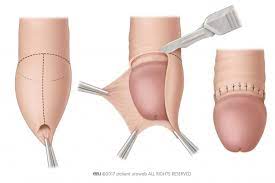 Circumcision is the removal of the foreskin from the human penis. In the most common procedure, the foreskin is opened, adhesions are removed, and the foreskin is separated from the glans. After that, a circumcision device may be placed, and then the foreskin is cut off. Topical or locally injected anesthesia is generally used to reduce pain and physiologic stress. The procedure is most often an elective surgery performed on babies and children for religious or cultural reasons. Neonatal circumcision is usually elected by the parents for non-medical reasons, such as religious beliefs or personal preferences, possibly driven by societal norms.

Circumcision is contraindicated in infants with certain genital structure abnormalities, such as a misplaced urethral opening (as in hypospadias and epispadias), curvature of the head of the penis (chordee), or ambiguous genitalia, because the foreskin may be needed for reconstructive surgery. Circumcision is contraindicated in premature infants and those who are not clinically stable and in good health. If an individual, child or adult, is known to have or has a family history of serious bleeding disorders (hemophilia), it is recommended that the blood be checked for normal coagulation properties before the procedure is attempted.

There is strong evidence that circumcision reduces the risk of men acquiring HIV infection in areas of the world with high rates of HIV. The superficial skin layers of the penis contain Langerhans cells, which are targeted by HIV, removing the foreskin reduces the number of these cells. When an uncircumcised penis is erect during intercourse, any small tears on the inner surface of the foreskin that comes in direct contact with the vaginal walls, provides a pathway for transmission. When an uncircumcised penis is flaccid, the pocket between the inside of the foreskin and the head of the penis provides an environment conducive for pathogen survival, circumcision eliminates this pocket. Some experimental evidence has been provided to support these theories. Male circumcision provides only indirect HIV protection for heterosexual women. Some evidence supports its effectiveness at reducing HIV risk in men who have sex with men.

The finding that circumcision significantly reduces female-to-male HIV transmission has prompted medical organizations serving communities affected by endemic HIV/AIDS to promote circumcision as an additional method of controlling the spread of HIV. In 2007 the WHO and the Joint United Nations Programme on HIV/AIDS (UNAIDS) recommended circumcision as part of a comprehensive program for prevention of HIV transmission in areas with high endemic rates of HIV, as long as the program includes “informed consent, confidentiality, and absence of coercion”.

Circumcision is associated with a reduced prevalence of oncogenic types of HPV infection, meaning that a randomly selected circumcised man is less likely to be found infected with cancer-causing types of HPV than an uncircumcised man. It also decreases the likelihood of multiple infections

An inflammation of the glans penis and foreskin is called balanoposthitis, and the condition affecting the glans alone is called balanitis. Most cases of these conditions occur in uncircumcised males, affecting 4–11% of that group. The moist, warm space underneath the foreskin is thought to facilitate the growth of pathogens, particularly when hygiene is poor. Yeasts, especially Candida albicans, are the most common penile infection and are rarely identified in samples taken from circumcised males.

There is a plausible biological explanation for the reduction in UTI risk after circumcision. The orifice through which urine passes at the tip of the penis (the urinary meatus) hosts more urinary system disease-causing bacteria in uncircumcised boys than in circumcised boys, especially in those under six months of age. As these bacteria are a risk factor for UTIs, circumcision may reduce the risk of UTIs through a decrease in the bacterial population.

A 2010 review found circumcisions performed by medical providers to have a typical complication rate of 1.5% for babies and 6% for older children, with few cases of severe complications. Bleeding, infection, and the removal of either too much or too little foreskin are the most common acute complications. Complication rates are higher when the procedure is performed by an inexperienced operator, in unsterile conditions, using unsterile equipments and in older children. Circumcision does not appear to have a negative impact on sexual function.

Effective pain management should be used. Inadequate pain relief may carry the risks of heightened pain response for newborns. Newborns that experience pain due to being circumcised have different responses to vaccines given afterwards, with higher pain scores observed. For adult men who have been circumcised, there is a risk that the circumcision scar may be tender.

The extent to which circumcision affects penile sensitivity and sexual satisfaction is controversial but highest quality evidence indicates that circumcision does not decrease the sensitivity of the penis, harm sexual function or reduce sexual satisfaction. A 2013 systematic review found that circumcision did not appear to adversely affect sexual desire, pain with intercourse, premature ejaculation, time until ejaculation, erectile dysfunction or difficulties with orgasm.